In 2014 we decided to grow hay.  This was a departure from the relatively intensive horticulture which we'd been doing for over a decade.  It meant a new scale of equipment, a lot or research and advice and a steep learning curve.  The result was amazing hay and lots of fun.  Making hay is real!

My first stop was with friendly agri-advisor Matt.  I asked if it was possible to farm and make money without sprays, without animals, and without government.

Then there was the question of equipment.  We had a budget for tractor and bits, and were prepared to invest it, but where caught in the predicament of wanting more than we could afford and knowing that the cost would probably be uneconomic anyway based on farmgate prices. 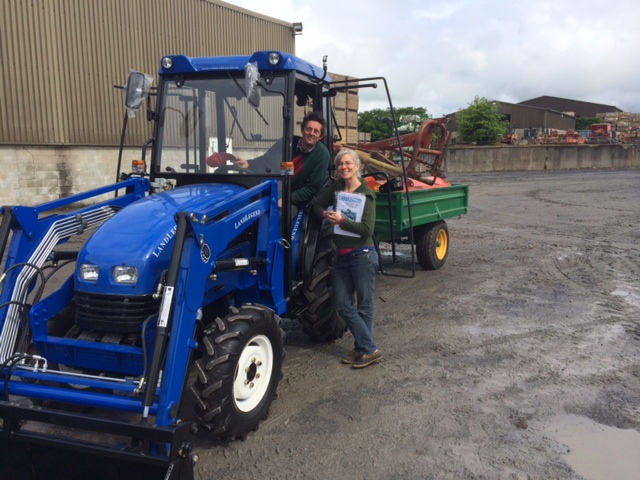 So we looked and looked.  It was fun shopping.  We ended up with some excellent kit:

You can guess it was a big bill ... well, it should hold its value and do the business.  The tractor is still admired by friends who drive far bigger kit.

Now to the grass.  We had four fields to work with.  We planned to watch, cut and bale three of them.  The fourh one needed reseeding from scratch.  The only maintenace done on the three grassed fields was cutting docks and nettles with a strimmer.  After harvest I also removed a couple of patches of docks and nettles by hand applying the dreaded glyphosate.  I didn't like doing that, but it cleaned the patches and they had plenty of time to recover for the following year.

Seeding a field was instructive.  I learned how to pick stones!  After ploughing, came the stone removal.  It seemed to never end.  Family was recruited over Easter weekend to lug small stones off the field after John had been in with his tractor and loader to take out the rocks (0.3 - 3.0 metres in diameter).  Stephen Eustace did the ploughing and seeding.

What grass to grow?  I wanted a mixture that would offer good feed and maintain a healthy soil condition.  In the end we had a custom mix made up including clover, fescue, rye and herbs.  It was sown too late to get a crop off it.  The field was topped twice in the summer to keep weeds down.  By the beginning of the following year however it was a delicious sward, thick with clover, plantain and chicory with fescue and rye coming through.  The clover improved the soil condition immeasurably, though it was a bit heavy so this year the field will be grazed down by sheep and hopefully next year it will give a good cut of grass. 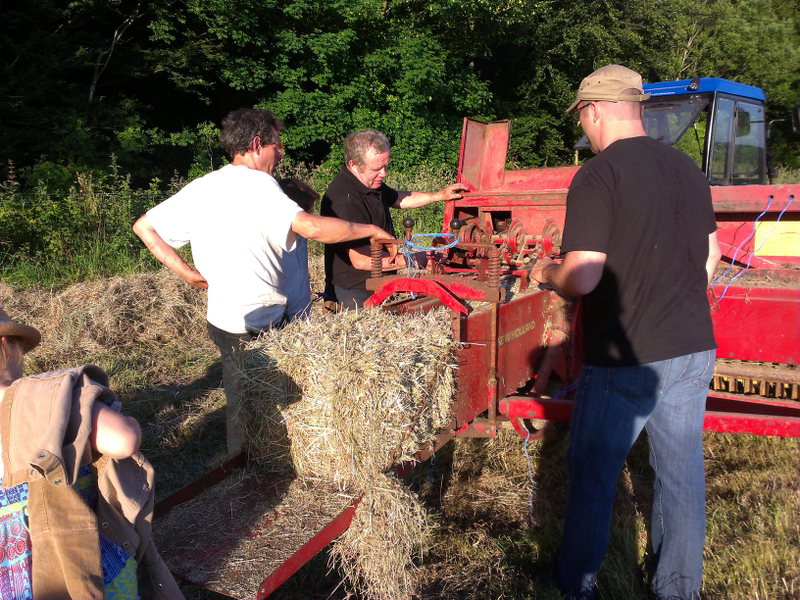 The other fields gave us quality hay, which I started cutting in the rain!  Mad, you must think.  And it seemed that way to me but Noel, an automotive magician who had been a hayman in a previous life, told me that the problem arises if you turn the hay when wet, but if it is left alone to dry it'll be fine.  I had watched the forecast and expected dry weather, so I cut.  The hay cured for 5 days and then I started turning it.  Then, a few days later, Noel, Greg, my bro-in-law visiting from Canada, and I went off to buy a baler - that evening we baled the first bales.  It was gorgeous!

Over the following weeks I cut and turned another 50 acres or so and was lucky to sell most of that to a nearby farmer because the dry weather caused everyone to make hay at the same time so the price dropped 30% in a couple of weeks and then people just stopped buying!

Hay is surprisingly important.  It can nourish soil (the leguminous varieties) and offers habitat and food to wildlife.  Importantly, without hay you can't keep animals through the winter. Some say it is the foundation of civilisation.